Srebrenica is so much more than a small town on the eastern border of Bosnia. It’s a name that is associated with genocide. The number 8,372 is often mentioned alongside the name of the town, as that’s the number of unarmed men and children who were killed there by Serbian forces in July 1995. For me it’s a reminder that extreme nationalism lies dormant within my own country and, if we’re not aware of it, the same thing could happen at home. Brexit and Trump are rather tame examples of what can happen if nationalism is let off the leash.

These were my thoughts on the long bus journey from Sarajevo to Srebrenica. I noticed the date, July 2021, and realised that it was exactly 26 years since the genocide. What would I find there?

My reason for visiting Srebrenica was not very noble: I was looking for dirt. My mission was to photograph graffiti or posters that celebrated the Bosnian-Serb war criminals who had organised the genocide. Some images like this would be useful for the book of Bosnian War Posters that I’m working on. I’d seen plenty of material like this when I was last in Bosnia, over 20 years ago, and assumed it would be plentiful – even though the denial of genocide had just become outlawed in Bosnia (resulting in the Serbian part of the Bosnian government going on strike).

But I didn’t find any nationalist graffiti at all in Srebrenica, even in the grubby backstreets. I was surprised as this town had been emptied of its Muslim majority, populated by Serbs from elsewhere and I assumed it was a hotbed of extreme hatred against Muslims. My expectations were being overturned.

In the centre of town is a vast mural that takes up the whole side of a building. Here’s my photo of it: 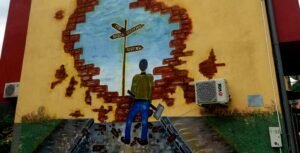 I didn’t pay much attention to this mural when I first saw it as I didn’t really like it, but later on I realised it’s verging on the arrogant to dismiss a mural as it doesn’t fit my personal standards of high art. But when I read the words on the signposts I realised that this is an extraordinary piece of work. The words translate as PEACE, HAPPINESS, THE FUTURE AND SUCCESS.

I had come to Srebrenica looking for evidence of hatred and support of extreme nationalism but what I found was a massive mural celebrating hope and peaceful coexistence. What’s more, there were no traces of graffiti on that mural and, to me, this suggests that it’s accepted by everyone.

And the positive impressions kept on accumulating: I went into a basic restaurant where a Muslim family (the women were wearing white headdresses) were being politely served; there was an elderly Muslim lady waiting outside the supermarket and none of the passers by gave her a dirty look or made sneering comments; and I heard various stories that the small number of Muslims who have returned to the area were fully accepted, even welcomed, by the local Serbs.

Later on I went to the massive graveyard where the 8,372 victims are commemorated. It’s a place of beauty with thousands of carved, marble headstones. On the other side of the road is an empty factory where a superb exhibition about the genocide has been put together, focusing on the UN forces who showed incredible weakness in not standing up to the Serbian aggressors.

Visiting that graveyard is a powerful experience but what impressed me the most was the complete absence of anti-Muslim graffiti outside the site. There were two large security booths but both were empty. I couldn’t help thinking that if this had been in the UK there may well have been all sorts of vicious comments daubed onto every available surface. Although this type of hatred is reasonably well controlled in the UK, I’m under no illusion that there are a lot of people who would like nothing better than to massacre people of a different colour, religion or ethnicity. I feel there is more anger and hatred on the ground in my own country than there is here. That’s why I can’t blame the Serbs for what they did – I blame nationalism. Nationalism is like an intoxicating drug which can make people do things they would normally consider totally irrational. For me, whisky has that effect: give me half a bottle of whisky and I lose all fear and become inflated with wild recklessness.

The positive impressions kept piling up. I had a friend in Srebrenica, a filmmaker called Ado Hasanovic, and he was working with some volunteers at what can best be described as a housing estate: about ten big houses, and some sports grounds, within a large compound. I was introduced to the volunteer manager, Mirela Ahmetbegovic, and she explained that every year between 70 and 90 volunteers are recruited for the summer holidays and they visit single old ladies in the area and do all sorts of building projects. She pointed to the houses and told me that, in prior years, they had all been built by volunteers. During term time the buildings are used to house children from the outlying villages, children who are too remote to attend primary school. What an incredible project and I take my hat off to the charity behind it: The International Forum of Solidarity: Emmaus.

My final positive impression of Srebrenica was hitchhiking, a means of travel that’s virtually impossible in my own country, as people have become too suspicious and fearful. I hitched twice around Srebrenica and on both occasions something unique happened: the first car that went by stopped. I’ve hitchhiked in many countries of Europe as well as in Tibet – the draft title of my first travel book was Hitching to Shanghai – but never has this happened to me before. The first car almost never stops, and it certainly doesn’t happen twice. Anyone who has hitchhiked will know that you don’t get a lift unless you’ve first stood at the side of the road for hours on end and have almost given up the will to live.

Making sense of it all

On my way back to Sarajevo I felt glad that my negative expectations had been replaced with such positive impressions. I was particularly struck by how there was a real atmosphere of tolerance on the ground and no sign of the hatred that had caused such devastation 26 years ago. But how to explain it? How to understand how a peace-loving people had got involved in genocide?

It’s all very well blaming it all on nationalism, but what does that actually mean on the ground? What happened? How did neighbour turn against neighbour? What was the methodology used to activate people’s deepest fears?

The most obvious conclusion is that people who live together in communities – villages, towns and cities – get on with each other whatever the religion, nationality or ethnicity. Ordinary communities have enough flexibility and understanding to overcome the occasional outrage. But when political leaders and sections of the news media get their teeth into extreme nationalism, the results are predictable: as a new version of reality is crafted the truth becomes the first victim; all problems are laid at the door of “the other” as well as imminent threats of attack; people are worked up into such a frenzy of anger, fear and hatred that carrying out acts of violence flows almost naturally. And, like an addiction, stopping nationalist-fuelled-rage is incredibly difficult.

My understanding of how it worked on the ground is based on what I’d heard just after I moved to Tuzla, just after the Bosnian war (1992-95), and also from what I read. Before the war, each village, town and city in Bosnia was made up of people who were associated – by religion – with the Muslim, Croat or Serb identity. During the Yugoslavia era, when Bosnia-Herzegovina was one of 6 republics that made up the nation, all these ethnic groups got on well with each other– despite the horrors that had taken place in the Second World War. But, when the Serbs released the demon of nationalism, these ethnic divisions became the flash points for war.

But these people had been neighbours all their lives and there was no way they were going to turn on each other, drive them out and kill anyone who objected. Apart from anything else, they didn’t have any weapons. The local Bosnian Serbs were decent people and they knew that their Muslim and Croat neighbours were too, despite Serbian propaganda being pumped out at the time that warned of an impending Islamic attack and resurgent Croatian fascism. The Serbian message at the time was: We must attack before we are annihilated!

What mobilised the local Serbs to action was the appearance of the Serbian death squads, like Arkan’s Tigers. These units had been covertly sponsored by the government in Serbia and were made up of experienced soldiers, some with French Foreign Legion experience, all with a hunger for killing. What they would apparently do when they turned up in peaceful, multi-ethnic communities in Bosnia, and Croatia, would be to gather together as many local Serb men as they could. They would warn these men about the imminent danger they were in from the (imaginary) forces of Croatian fascists and Islamic fundamentalists who were about to descend on the town and urge them to take immediate action before it was too late. The death squad would order all Muslims and Croats to leave town and if there were any objections they would start the killing. I’m not sure to what extent the local Serbs were involved in these massacres but that’s not the point – they were implicated. By not standing up to these death squads and their crimes these local Serbs had become complicit in crimes against humanity.

After the death squads left town the local Serbs would be left behind, no doubt with a guilty conscience about what had happened. But what could they do? If they admitted to having seen any atrocities they could be implicated so it must have felt safer to just keep quiet and deny any knowledge of what happened.

The good news is that people on the ground all over this beautiful country want nothing more than to live together in harmony. The problem is that the vast majority of people in Bosnia-Herzegovina don’t vote.

I took the photo linked to this article, of the graffiti saying NEVER GIVE UP, at the EMMAUS volunteer centre in Srebrenica. The dates commemorate the genocide and I was there exactly 26 yeas later, glad to see that the massacre hadn’t been eradicated from the scene of the crime. What I love about the message Don’t Give Up is that it applies to Serb and Muslim alike, it’s relevant to anyone regardless of their ethnicity, religion or gender.

A Bosnian hen, which reminds me of my Dad...his ey

A piece of tissue paper on a street in #Sarajevo

A wild flower in Sarajevo.

The guardians of Bosnia's national bank...

Wooden carvings at the Sarajevo Academy of Fine Ar

Old building and grafitti in Sarajevo

#Bosnian Transformer made up of #Sarajevo building

Sarajevo is full semi feral cats. Most are unfrien

I hiked in the hills above #Sarajevo yesterday and

I just saw this incredible #poster from @political

An interesting mural in Sarajevo

This is where I live in Sarajevo, the street of th

An #Islamic graveyard in the old town of #sarajevo

Glass and robe in exhibition of product design at