Memory is an Unreliable Witness

I recently met up with Xander Berkeley, a Hollywood actor who played in one of the greatest thrillers of all time – Terminator 2 – which was made in 1991. He has featured in over 200 films and TV shows since then and is currently working on the Walking Dead, one of Hollywood’s most successful exports.

Talk ranged far and wide and we talked of the time he visited us in Scotland, over 30 years ago, when my three brothers and I were in the midst of our teenage rebellions.

“Remember when we drove across Ireland,” said Xander, who then described a series of incidents that took place on the Emerald Isle – none of which I remembered. I had my own set of memories of that trip, perfectly preserved, like an insect in amber – none of which Xander remembered.

Memory is like a telescope. You look through it at a faraway point and see some interesting detail. When we look through a telescope we know we’re only seeing a microcosm, but when we look back at memories we think (at least I do) that we are seeing the whole picture. This helps me realise that I shouldn’t rely on memory too much.

Sometime later Xander sent me a stark photograph of himself at the Callanish Standing Stones on the Isle of Lewis, the most north westerly part of the (soon-to-be-defunct) United Kingdom. Here it is: 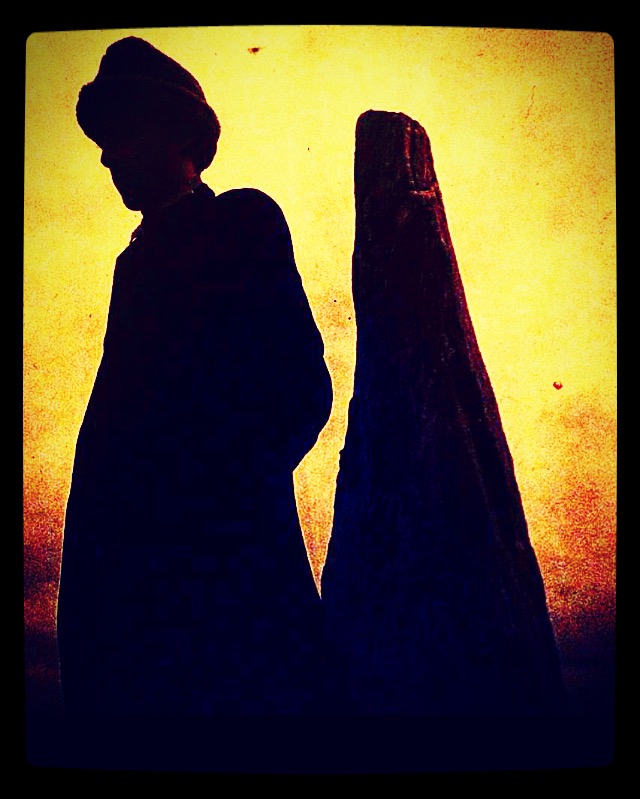 All Xander said about this photo was that it had been taken by Kim, my elder brother, with whom he had travelled to Callanish back in the eighties. The third man on the trip was a school friend of my brother’s called Angus Farquhar, who now runs highly original events with his company NVA: “powerful public art that reaffirms people’s connection to the built and natural heritage” says his website.

My brother Kim went on to do great things too: not long after this Callanish experience he joined a group of Buddhists and became one of the first Buddhist monks in the UK. He stuck at this for over 12 years. Now he lives in Edinburgh where he does renovation work.

I knew that Callanish was a mythical place, location of a prehistoric stone circle that is said to be more impressive than Stonehenge. The fact that I have never been to the Callanish standing stones, and have always wanted to go there, made their journey seem all the more mysterious.

I then had an idea: ask each of the three travellers to send me their impressions of that journey and then edit it all together into an article. I thought they wouldn’t reply as they are all very busy but, to my surprise, they all did.

This is what they said:

Lewis: a carved hulk of rock beaten by a billion crashing waves; held fast on the outermost point of Europe.

My recollections of that journey revolve around the striking circle of towering stones stabbed deep into the earth. The bleak landscape was barren of branch or flower, stone or structure, but for these tall shapes standing like robed druids in a circle.

The glacial jig-jagged cut-out of a landscape

Bright in their sea of otherwise utter blackness.

We gathered all the dry brush we could find and brought it down to the sea. We imagined Vikings mooring ships in the very spot where we lit a bonfire.  We danced around it like mad Rip Van Winkles singing a Leadbelly song.

Mine are hazier recollections. Drugs and drink remove sections, while bringing certain visual images into startling clarity, and strong sense memories of place and texture.

Cold, wet beaches, gales of laughter with Kim as we convinced Xander that the limpet was a Scottish delicacy. We manically dislodged one from a rock. I’m pretty sure he ate it, and survived to tell the tale.

The strongest memory is taking some form of stimulant. I was never quite sure what it was. But we took it early one morning before going to the Callanish rock circle.

We stayed together and spent time on our own. At first I had spasms in my stomach and then slowly acclimatised to the place. I stood for what felt like hours with my face pressed against a standing stone. It was very quiet.

Somewhere in a remote island croft three travellers face each other in the pre-dawn light. Stumbling around in the semi-dark of the hovel, coffee is shared and the group stagger out into the bleak heather landscape.

No words are spoken.

There is a plan.

Xander, the eldest, steps out in a dark greatcoat with a Russian fur hat.

He footles around in his pockets, produces a small tin and distributes tiny white pills.

Xander: Take these. I’ve kept them for this moment. They’re an experimental batch….first of its kind.

Angus & Kim are wearing tightly fitting combat gear. Their hair shaved at the sides, military style. Polish caps set off at an angle disguising their pubescent faces and lack of stubble.

They swallow the pills without question.

The three are driving in a small car around twisted roads through the unremittingly bare island.

Angus is at the wheel as they hurtle through low hills. The light outside is still dim. A fine mist seems to envelop them. The car is small. They are heading to the North West of the island. There is only one road and no signposts.

As they close in on their destination the terrain seems to flatten out and stretch into the far distance. The beginning of the sea and the end of the land is indistinguishable. The cloud cover is still complete in the grey dawn light. A lime-washed croft with a peat roof appears in the distance. Beyond the croft are primeval standing stones. So many of them placed in concentric circles.

The group emerge out of the car and skirt around the croft. Their pace is slowed. No one speaks.

Kim is listening to Einsturzende Neubauten on a Walkman as the first waves of pill induced euphoria sweeps over him.

Angus is prowling around the standing stones, his sharply angled features in silhouette against the flat seascape beyond.

Xander is standing astride a neolithic pit. A great stone towers over him, shadowing his frame.

The ancient runes seem to murmur their assent.

Daylight reveals the vast ocean horizon beyond where the stones have stood for thousands of years.

The group travel back the way they came.

The purple tints of the rolling heather hills seem brighter. The pale glint of the sun reflecting off the flat sea is lighter.

For a time they will bask in the afterglow….

Photo of Xander Berkeley on the set of the film Straight to Hell (1986) directed by Alex Cox (“A gang of bank robbers with a suitcase full of money go to the desert to hide out.”)

A Bosnian hen, which reminds me of my Dad...his ey

A piece of tissue paper on a street in #Sarajevo

A wild flower in Sarajevo.

The guardians of Bosnia's national bank...

Wooden carvings at the Sarajevo Academy of Fine Ar

Old building and grafitti in Sarajevo

#Bosnian Transformer made up of #Sarajevo building

Sarajevo is full semi feral cats. Most are unfrien

I hiked in the hills above #Sarajevo yesterday and

I just saw this incredible #poster from @political

An interesting mural in Sarajevo

This is where I live in Sarajevo, the street of th

An #Islamic graveyard in the old town of #sarajevo

Glass and robe in exhibition of product design at