This week, in the English village of Flore, I was quite shocked by the tabloid headlines about increasing prison sentences and realised that Boris Johnson is similar to Slobodan Milosevic: he is a blatant opportunist. Both of these leaders can be explained by this single word: opportunism.

I’m not saying that Boris is planning to carry out any of the atrocities that Milosevic organised, or that he is “responsible for the most violent, destructive and genocidal wars since the Holocaust during World War II” — to quote the Urban Dictionary. He’s a funny chap, would be a great dinner party guest and I really don’t think he has some evil masterplan to exploit us all on behalf of big business. But he’s still an opportunist, as some kids are who will use any opportunity to get what they want. He’s using harsher prison sentences to appeal to the tabloids, and peoples’ base instincts.

Check out this cover from the Daily Express of the 1st of October 2019: 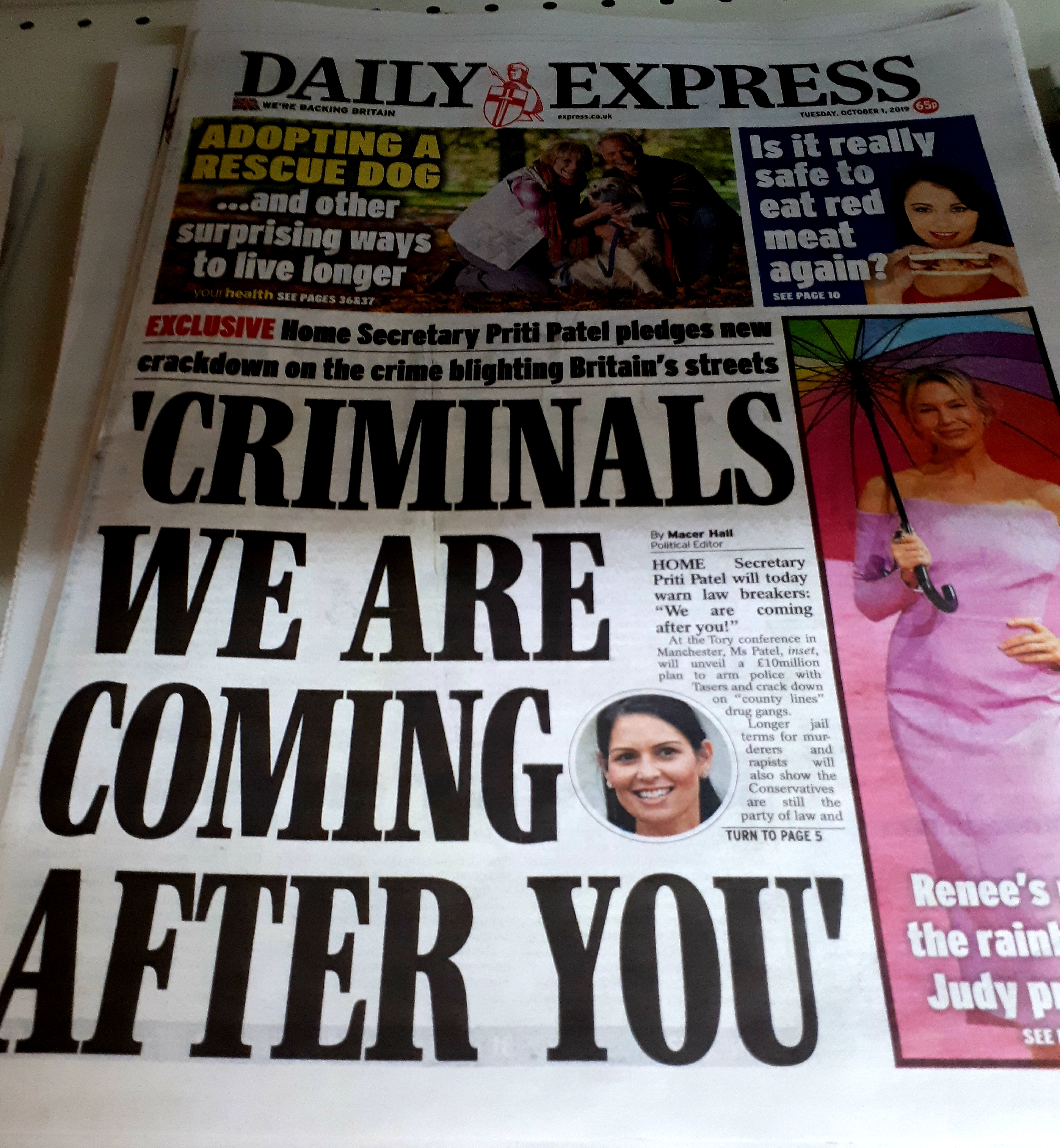 I spent a few years in Bosnia, just after their civil war (1992-95), trying to work out how it all went so wrong and who was to blame. My conclusion was that Milosevic started it but the Croat leader (Tudjman) soon followed suit and carried out a series of atrocities; and even the Bosnian Muslims weren’t as innocent as they’re sometimes portrayed.

The Urban Dictionary’s description of Milosevic is quite funny and generally correct, but they’re wrong to say “Milosevic the son-of-a-bitch wanted all of Yugoslavia for his own rule.” What really happened was that Milosevic wanted to control all parts of the former Yugoslavia that had a Serbian minority — and this idea gave him a greenlight to invade, terrorise and occupy chunks of Bosnia and Croatia and treat Kosovo like a rebellious colony. Once he’d carved out his chunk of those countries (about 51% of Bosnian territory and about 20% of Croatia) he would happily let the other ethnicities run what was left. With American help, the Croatian army were able to expel the Serbs but 51% of Bosnia is still controlled by an ethnically pure Serb entity.

The opportunist part of all this is quite clear: Milosevic became president of Serbia in 1989, just as the whole Yugoslav construct was falling apart. He initially tried using Communism as a method of rule but found that it wasn’t working. He would have considered a western democratic method but, presumably, assumed it would have been too difficult to get the masses on board — so he turned to nationalism.

Nationalism made, and then destroyed, both Milosevic and Yugoslavia. The methodology was simple and, because it was based on fear, was incredibly popular. Serbs were told they were being victimised by the Albanians (in Kosovo), the Croats, the Bosnian Muslims , as well as the Americans and Germans. With such an array of apparent enemies it didn’t take much to cook up a storm of fear and anxiety — leading to Milosevic authorising a series of military actions (seizing chunks of neighbouring countries) as a pre-emptive strike.

Boris as opportunist — this week’s evidence

Ever since Boris changed sides in the Brexit referendum, after he wrote that Brexit could result in the “breakup of the UK”, it’s been clear that he’s an opportunist; in other words he has no real moral compass and just goes with what he thinks will bring him more power.

This weeks announcement from the Tory Party conference that they’ll make sure people stay a lot longer in jail fits this behaviour perfectly: on the one hand the Tories know perfectly well that the prisons are full to bursting and that jail time is a complete waste of time as those who emerge are marginalised and turn to crime in order to earn a living. But they also know that the public have been stirred up by endless tabloid stories of crime and a politician who promises a a harsh crackdown will get votes.

It seems to be working. His opportunism translates easily into optimistic promises of throwing money at health, police and education; and his nonsensical approach on Brexit doesn’t seem to matter as we’re all bored to the back teeth of it and just want it over. I checked the YouGov polling data today and it says Johnson is “the most popular Conservative politician” today, with a rating of 33%.

What’s most interesting about this is that some of the most extreme dictators would curry favour with their populations with spendthrift policies like this. Hitler ordered that the public shouldn’t be deprived of anything during the war, whereas in Britain the whole population had a military-type routine imposed on them.

Equally interesting is that the most famous opportunist of the twentieth century was probably Benito Mussolini who started out as a Marxist and then turned to fascism as he was able to use it more effectively to appeal to people’s most basic instincts.

Why are they so relaxed?

A final point is that all of these nationalist/opportunistic leaders — and I’m thinking about Putin in this category — seem to go about things in such a relaxed style. None of them seem to suffer from the stress that other politicians do (just think of Theresa May compared to Boris).  Milosevic never seemed to be rattled and he was expert at dismissing, and ridiculing, the endless accusations of atrocity that came his way. As with Putin, he was always ready with a conspiracy theory regarding who was really to blame.

I remember when the Serbs bombed the market place in Sarajevo, killing hundreds, the official Serb story was that the Muslims did it on their own people in order to curry favour with the west. Putin does the same with the Ukraine — he doesn’t admit that he’s done anything except react to American and EU pressure.

I realise you can’t put Boris in the same pot as regards that level of criminality — he’s on a far milder level than the others — but just look at the way he seems to be enjoying the chaos he’s causing over Brexit. In my opinion these opportunists are able to treat the whole thing as a game, which is in fact invigourating rather than stressful. I think their lack of basic morality allows this.

What can be done? All we can do is be aware of the problem, and remember the old adage “knowledge is power”. I’m sure the answer will present itself before long and the pendulum will swing back to a more moral-based politics.

I wrote this story as I’d been researching prison reform. You might like to see this article I wrote about an incredibly successful experiment in prison reform — so successful that the Scottish government closed it down.

As always, I’d be very grateful for any comments under here.

I'm finding so many old family photos. This is me

As we prepare for my Dad's funeral (everyone's wel

Another great old shot of my late Dad. This one is

Before transforming into a #Bohemian my dad lived

My amazing dad has just died. So sad. You can see

Meet Lydia Murray (@lydiamurryy) who is a force of

I've been skiing in France with my daughter @lar.f

My phone drowned and I tried taking a photo with m

With my brother Kim in Brighton, yesterday... @bri

Merry Christmas from Brighton and Hove...

A few images from this year, from Edinburgh and Ne

I spent last week helping my friends Maija and Alm

Some images from East Lothian, just outside Edinbu

Some images from #edinburgh where it snowed and I

The Hollyrood (not Hollywood) district of Edinburg

I'm in #Scotland and am about to visit the exhibit

Load More... Follow on Instagram
Manage Cookie Consent
To provide the best experiences, we use technologies like cookies to store and/or access device information. Consenting to these technologies will allow us to process data such as browsing behavior or unique IDs on this site. Not consenting or withdrawing consent, may adversely affect certain features and functions.
Manage options Manage services Manage vendors Read more about these purposes
View preferences
{title} {title} {title}